Rampur, a city rich in historical and educational value proves to be a promising destination for visitors all over the world. A visit to Rampur will be a phenomenal and a knowledgeable experience. The fragrance of ancient Indian culture prevails in the soil of Rampur. The blend of rich heritage and diverse culture attracts thousands of visitors every year. Scholars from all over the world visit Rampur Raza library in an attempt to learn Indo-Islamic traditions and values. Famous for various religious centres, Rampur is also the pinnacle of commercial and business hubs. It can either be a historical visit or a leisure trip with family and friends, the city always welcomes every visitor with the treasure of tourist importance. 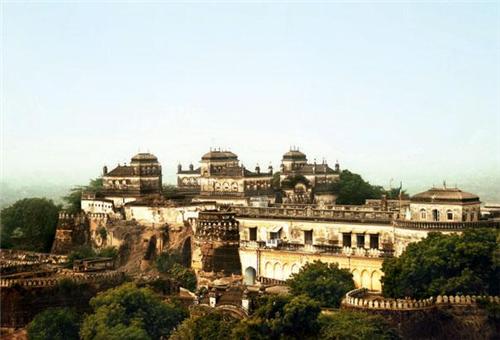 The city of Rampur depicts the royal ideologies. Although much of the former royal kingdom is been deteriorating, the hint of pageantry remains in the form of beautiful domes, graceful arches and huge walls in the city.

The first appearance one could get on visiting the city is the beautiful arched gates or darwazas trailing towards the inner city. The visitors could see various kinds of darwazas like the one that are simple, scallop-arched, oriental looking and also some dutch-styled arches.

On reaching Rampur fort, by travelling through the arched Darwaza walking through the wider and narrow lane of the city, one can find innumerable shops along the crumpling walls of the fort, selling jewelleries, clothes and Rampuri topis. Rampuri topi is rigid black hat made out of velvet. The inside of the fort is an area of four acres, resembling a miniature city, harbours the Raza Library at the center.

Raza Library, managed by the Government of India, is a store house of innumerable collection of ancient manuscripts and literatures. It is considered a treasure of Indo-Islamic culture. The fort also houses Rang Mahal, which was once the guest house of the Nawabs and a congregation hall, Abbas Market in the south east corner of the city is famous for intricate embroidery. On the southern side of the fort lie the majestic red domes and minarets of Jama Masjid, a mosque laid by Nawab Faizullah Khan and built by Nawab Kalb Ali Khan at the cost of 300,000 to resemble the Jama Masjid in Delhi. It is a place of religious, tourist and business attractions, because of the big markets surrounding it. The Shadab market and the Sarrafa markets beside the mosque are famous for jewellery shops. In the Safdarganj Bazaar behind the mosque, one can find a handful of Rampuri Chaaku shops, the chaaku are the infamous knives made in Rampur and banned for its oversized blades. 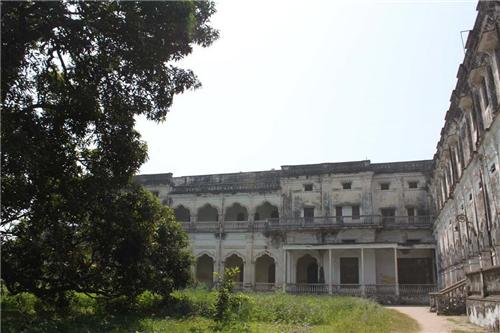 Photo source
Situated outside the city’s center is the Kothi Khas Bagh, a magnificent Mughal palace, located in Rampur near the Moradabad-Rampur Civil Lines road. It was believed that Mughals moved into this palace in 1930s. Winged over 300-acre compound, the palace furnishes 200 rooms, built with an influence of British patterns in Mughal architecture. It has Durbar hall, music rooms and also personal apartments even with a personal cinema hall for the Nawabs. Adorned with Burma teak, Italian marbles and Belgium glass chandeliers, this palace stands a specimen of architecture of bygone era.

Benazir Kothi is another palace believed to be the summer place for the Nawabs is located few kilometres outside the city. It is of the same architectural importance as that of Kothi Khas Bagh. The Dargah of Qadam sharif or the shrine of the holy foot of Prophet Mohammad is located besides the Benazir Kothi.

The Modern Rampur, breaking out of the history, Rampur is a portrait of busy commercial and modern lifestyle. Aryabhatta planetarium in Rampur is a place of attraction for kids. They present a movie for kids on “Kids Night sky”. It is the first planetarium in India to install laser technology.
Signifying importance of Mahatma Gandhi during the Indian Independence, Gandhi Samadhi stands along the way of Mohammed Ali Jauhar road leading from Khas Bagh to Top-Khana Gate. It is the only place outside Delhi’s Raj Ghat to preserve the ashes of Mahatma Gandhi. Raza Ali Khan is believed to carry the ashes from Delhi to Rampur in an urn on an elephant.

Ambedkar Park is beautiful greenery, covering about 0.38 kilometres, is a memorial of Bhimarao Ambhedkar, located near Rampur. It has a playground for kids.

Fostering different religions in its lap, Rampur is a home for various temples, mosques and churches. Shiv Mandir is the famous Hindu temple located in the center of the city. An ancient Kosi temple is located along the North coast of Rampur. Shri Saibaba Mandir is near the national highway, Rampur. Apart from the Jama Masjid, Masjid Syedan, Masjid Ala Khan, Zeenat Masjid and Lal Masjid are some of the famous mosques in the locality. Ahi Chchhatra is the most prominent Jain temple in Rampur. Bhai sahib Bhai Ji and Gurudwara singh sabha are the Sikh temples located in the southern Rampur along the national highway and adjacent to Rampur Railways.

No visitors in Rampur will go without shopping, Rampur is famous for Indian markets as much as it for the Indian culture. Ranging from hand worked and embroider clothes to the precious jewels, Indian-made blades and knives to the sophisticated musical instruments are the souvenirs of Rampur. The shops in the markets of the walled city, welcome you with all the Indian colours and crafts. Beautiful and colorful kites will be feast for your eyes and they are at their best when you buy them in Rampur.

Hotel Tourist and Restaurants are located just opposite to the railway station making it easier for transportation. Modipur Hotel is a 2 star hotel, located little outside the city, along the Bareilly- Rampur road with all basic amenities and a multi-cuisine restaurant. Hotel Delite and Hotel Bombay palace are located on Rah-e-Raza road which are well suited for budget travellers, but without restaurants on the premises. If you choose to be luxurious or for an official stay you can choose The Ark-Hotels located at the national highway 87 of the industrial City, Rudrapur, near Rampur. 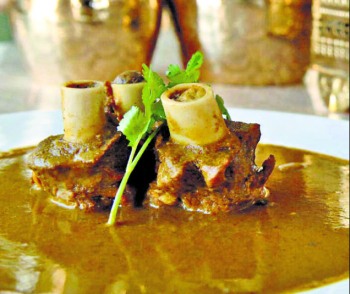 Rampuri food has a blend of flavours of Mughlai, Avadhi , Afghan and Rajput cultures. Rampuri Mutton Korma, doodhiya biryani, shammi kebabs, mutton koftas or the meat balls and the adrak ka halwa are worth tasting. There are several Dhabas and few restaurants in and around Rampur. Chicken changezi and Chicken-Kali-Mirch are the best delicacies of Nahid’s Chicken Corner, a Dhaba-style eatery located opposite to Nahid Cinema. Firdausi Korma will be of heavenly taste. Gulathi, a fried kheer and Shahi toast, should be on your top list. The appetizing Habshi halwa, locally called as halwa sond is a royal dessert made out of wheat and best enjoyed in winter.

How to Reach Rampur

Pantnagar Airport and Delhi airport are the nearest airports to Rampur and are connected to all major cities and towns. One can reach Rampur from these airports through taxi cabs that are available outside the airports. Rampur is well connected to all major cities by roadways. There is vast number of public transports available between Rampur to the nearby cities and its about 3 hour drive from Delhi. Rampur railways lie in Lucknow- Moradabad line. Several trains from the nearby cities stop here.