Rampur is the city headquarters of the Rampur district that is a part of the Moradabad division in the Rohilkhand region of Uttar Pradesh, India. It lies between the geographic latitude of 28°48’32"N and longitude of 79°1’44"E and covers an area of 84 km2 (32 sq. mi). It is about 945 feet elevated from the sea level. Rampur city belongs to one of the six tehsils of the district. The drainage and irrigation system of this city is controlled by the Kosi River, Rajera River system and the ground water system. It is an urban agglomeration governed by Rampur Nagar Palika Parisad or the municipality.

This city is the heart of the district, though not geographically but culturally. The organization and structure of this city were rendered by the Nawabs. They designed the city in a way such that the palace of the governor or the citadel was covered completely by the massive walls and the Mahals (palaces), government offices, Imambara (Congregation halls) and the Madarsa (structure used for teaching purposes) enclosed inside it. There is a surprising ideology behind the design of the streets in this city, which runs randomly into narrow lanes forming an irregular network, this is said to strengthen the communication between the people, their personal ties, moral equity and common interests within the city. 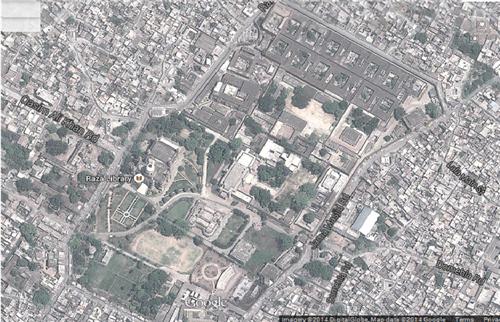 In this city the summer is at its peak between April to June and the average temperature ranges as high as 44°C to as low as 27°C. During the winter the temperature falls down to the lowest of 5°C and reaches the highest of 25°C. The monsoon winds blow through this region from the month of June till September; this city has experienced heavy rainfall. The precipitation is recorded as 8.154 inches (207.1mm) as the highest in the month of August and lowest of 0.24 inches (6.1mm) in November.

A part of Indo-Gangetic plain in the western part of Uttar Pradesh, it covers an area of 2367sq.Km.This almost heart-shaped district runs 81 Kilometres north to south and 49 Kilometres east to west. It is surrounded by Nainital, Badaun, Bareilly and Moradabad districts. The richness of the soil is attributed to the district being a part of the central Ganga alluvial plain. The district is irrigated from the tributaries of the river Ramganga like Kosi, Nahal, Dhimri, Baigul, Saijni, Pilakhau, Ghuga, Bauri etc. It has a population of 2,335,398 as on 2011 and the population density of 987 per square kilometre. The sex ratio counts about 987 female per 1000 male and there are 55.08% of educated people in this city.