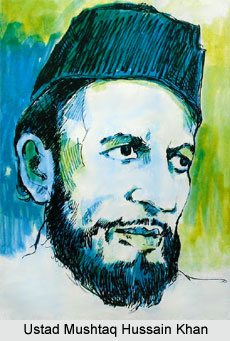 The culture of Rampur has a colossal impact of the literature, art and lifestyle laid down by the Nawabs. Even though the lineage of the inhabitants showed few traces of it, the city created its own culture. It was brewed with every aspect of common life.

Architectural handworks of Mughals and British in the walls of forts and palaces, soft and soothing Hindustani music, intricate handicrafts laid for display on the market streets, gracefully knitted and embroider veils covering the face of beautiful women, the fragrance of Rampuri cuisine, the famous knives with the brass fishtail and a sharp switch blade and the hybrid dogs with the speed of leopards and the valor of lion embellish the city.

Rampur gharanas, as the name explains by itself (Hindi: Ghar- House), is the home of Hindustani classical music. As a brain child of Khayal singers from the royal court of Nawabs, These musical houses nurtured several famous musicians and singers of the country. It was believed that the Rampur’s musical wealth was opened out to the country by the fifth Nawab, Yousuf Ali Khan. The story of Rampur Sahaswan Khayal Gharana started with Ustad Inayat Hussain Khan, who was a son of a veena player in the Rampur court, Ustad Mehboob Khan. The singing style in this gharana is closely related to the Gwalior gharana; the music features slow and medium tempos and full-throated voices with complexity in Taans (rapid pace elaborations) and Taranas (Medium or fast pace compositions).

Rampur the Hub of Poetry

Nawabs, themselves being great scholars have proven their intelligence in poetry too. Nawab Raza Ali Khan was a great poet and an artist. Nawab Kalb Ali Khan patronized poet Mirza Ghalib from Delhi, by providing him shelter and remunerations, when he was in need, after the fall of Bahadur Shah Zafar. Nawab Yusuf Ali Khan, a successor in the line was a poet who wrote in the pen name of “Nazim”, with the help and instructions from great poet Mirza Ghalib, Dagh Dehalvi and Ameer Minai and many other poets were supported by the Nawabs of Rampur. Sooner Rampur became a destination for scholars, intellectuals and great poets. Today the palace Khas Bagh houses poet Gulrez, who was a favourite poet of Nawab Murtaza’s family. He now lives there alone with his family. Rampur was in fact considered the third school of poetry. Abdul Wahab Sukhan, Azhar Inayati, Tahir Faraz are the famous poets who represent Rampur.

The Zari and Zardozi works that adorn and beautify the clothing of the Nawabs and also common man in many occasions are from the magical hands of karigaris, the weavers and knitters in Rampur. Being a Nawab’s resident, the city is cradle of zardozi and hand works. Hand and embroidery works from Rampur and its neighboring cities have their own value in the country. Abbas market in Rampur is poured with the city’s famous applique works. The zardozi products manufactured in the cities of Uttar Pradesh became a brand and carry their registered logo to prove their authenticity.

The blend of various rituals and diverse religion can be seen throughout the year in this city. As much as the religious practices were bonded with everyday life, they are also public affairs in India. Many of these festivals are religious in origin but they are celebrated in India with no thoughts for caste and creed. Rampur is not an exemption, though it was ruled by Nawabs and has almost 50% population of Muslims. The city has never failed to celebrate the glory of other religions. The very example could be the history of Nawabs. Prominent positions in Nawab’s court were bedecked with people from various religions. Nawab Raza Ali Khan, a famous scholar and poet, composed poems in Bhojpuri on Hindu festival Holi. No more explanation or examples needed to justify these words.

Rampur celebrates Diwali and Holi in grandeur, which are the most important Hindu festivals. Ram Navmi, Vijayadashami, Basant Panchami , Mahashivaratri, , Sri Krishna Janamastmi and Raksha Bandhan are the other Hindu festivals celebrated in this city. Eid ul Milad, Bakr-Id and Eid ul-Fitr are the festivals celebrated by Muslims in Rampur. Not just this, but Rampur is also a residence of Jainism, Buddhism and Sikhism. Mahavir Jayanti, Buddha Jayanti, Guru Nanak Jayanti are also a part of Rampur’s festivities. Rampur joins the globe in celebrating Christmas and Good Friday too.