Rampur is the city headquarters of Rampur district which is a part of the Moradabad division in the state of Uttar Pradesh in India. It covers a total area of 84 km2. The city accommodates a population of 325,248 (2011) with the density of 3900/km2. Hindi and Urdu are the commonly spoken languages in the city.

Spread over an area of 2,367 km2, Rampur district has a population of 2,335,398 as on 2011 census, with 52% of male and 48% female population. Population density of the city counting about 987 people per square kilometre. The parliamentary constituency of Rampur has about 1,154,544 electorates of which 531,775 are female and 622,769 are male. Mohammad Azam Khan is the present member of legislative council representing Rampur district. 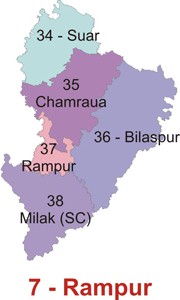 Rampur district Lok Sabha constituency is one of the 80 constituencies in Uttar Pradesh. For administrative convenience the district of Rampur is divided into six tehsils or taluks. The tehsils are Rampur sadar (Rampur city), Bilaspur, Swar, Milak , Shahbad and Tanda. The tehsils are further divided into six sub-tehsils or the developmental blocks as swar, Bilaspur, Said Nagar, Chamaraua, Shahbad and Milak. There are 1092 villages in this district.

The District Collector, who is better known as the District Magistrate (DM) is the head of the district administration. He takes up the responsibility to maintain law and order in the city; heads over the criminal administration; administers all the executive magistrates and the Police department in the district. He also undertakes the responsibility of civil administration and plays a significant role in the governing the municipal committee, market committee and panchayats.
District Magistrate
dmram[at]nic[dot]in
Office of district Magistrate Rampur-244901
Phone no.: 0595-2351061, 0595-23504
Email : dmram@nic.in
Mob: 9454417573
https://rampur.nic.in/

Rampur and its neighbouring cities fall under the administration of Nagar Palika Parishad or municipality. It is a civil agency that governs a city and is responsible for basic amenities of the city like water supply, hospitals, roads, street lights and drainage system. The importance and roles of the municipalities are far beyond this explanation. The chief officer of municipality along with the group of engineers, health officers and education officers are appointed by the state government to control the administrative affairs of the municipality.


District and Sessions Court in Rampur 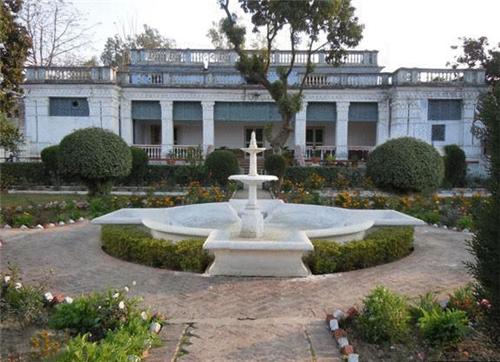 The Rampur district was consented to the dominion of India in 1947 and merged with the united provinces in 1950. The district court of Rampur was established in December 1949, under the Judicature of the Hon'ble High Court of Allahabad. At present the council has 21 courts in its judgeship, where it started with three. Hon’ble judge Sri Prakash Chandra Misra serves as the district and sessions judge of the Rampur court.

The police department of Rampur is under the Moradabad range of the Bareilly police zone controlled by the Uttar Pradesh Police force, which is considered as one of the largest police department around the globe. The District Magistrate, who is an officer of Indian Administrative Service (IAS), is responsible for the law and order maintenance of the district and hence he controls the police force. In spite of which, the superintendent of Police (SP) is the head of the police department for a particular district who is an officer of Indian Police Service (IPS).