As one of the developing commercial hubs in northern India, Rampur is a busy city in the headquarters of the district of Rampur, located in Uttar Pradesh, India. The city is deemed with various industries, most of which are agriculture-based like sugar refineries, textile weaving, cotton mills and manufacturing agricultural implements. Kite-making is one famous and prime industry in Rampur.

The richness of literature, unique architecture and art attributes to the prosperity of the city. The Raza Library, founded by Nawab Faizullah Khan in 1774 A.D, is a treasure house of Rampur’s learning and art, with a huge collection of oriental manuscripts and miniature paintings. Jama Masjid in Rampur is of great architectural importance and has become a major centre of tourism and business attraction, surrounded by big markets and shopping centres. The blend of various festivals and rituals with the religion is depicts the cultural glory of this city. 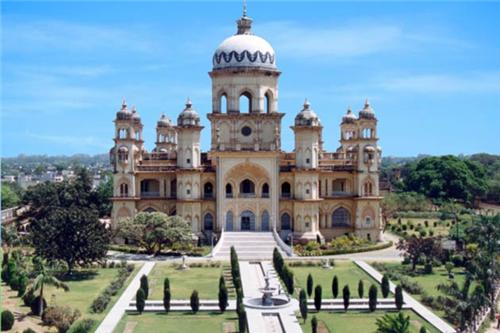 Earlier Rampur was a group of four villages named as Kather. During the reign of Mughal Empire Nawab Faizullah Khan proposed to rename the city as “Faizabad” but since many other places were known by the same name, this city was renamed as Mustafabad alias Rampur.

History states that Rampur had been a part of Delhi. The city was under the power of Katheria Rajput for 400 years. Nawab of Oudh gained power over the city after the Rohilla war (1774-1775). It was Nawab Faizullah Khan, who established the Rohilla state of Rampur in 1774.

The Mughal Empire was responsible for improvising the architectural, educational and cultural importance of the city. The Rampur fort was laid by Nawab Faizullah Khan. He being a great scholar contributed to most of the literature and art works, which are now the masterpieces of Raza Library in Rampur. Nawab Kalb Ali Khan was another emperor, after a decade from the reign of Nawab Faizullah Khan, was also a well-known scholar and literate, who contributed more towards the improvement of the standard of education in Rampur. He also built the Jama Masjid, which is now a famous architectural attraction of Rampur.

The Nawab of Rampur supported the East India Company during the first war of Indian Independence and this favoured them to influence the cultural, social and political life of Northern India for a long time. After Independence and till to date, the descendants of Nawab had been an important part in Indian politics and had won elections from Rampur parliamentary constituency.

Read More about History of Rampur

Born and brought up in the hands of Mughal Dynasty, the cultural significance of Rampur impacts the architecture, art and traditional life of the Mughals. This fact is been framed on the walls Raza Library as fine collection of beautiful miniature paintings and more than 12,000 rare and oriental manuscripts. 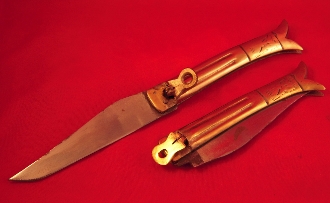 Not just music, Rampur is also famous for Knife-making. Rampuri chaaku is a famous Indian gravity knife, which by its name stands synonymous to the city, was made in Rampur for a long time. But In the mid of 1990s, Uttar Pradesh government banned the making of these knifes as they were beyond 4.5 inches long. Which led to the drop in popularity of these knifes.

It is not a surprise that every festival is religious in origin, but Rampur hosts all these festivals irrespective of the cast and creed. Diwali, Ram Navami and Krishna Janmashtami, Mahavir Jayanti, Eid ul-Fitr, Bakr-Id, Buddha Jayanti, Eid ul Milad, Guru Nanak Jayanti and Christmas are the important festivals celebrated by various religious people in harmony in Rampur.

Famous in northern India, Rampuri cuisine is labelled as such a “courtly cuisine”, is a blend of Mughlai, Avadhi and Rajputs food culture. The luxury of this cuisine is presented by the royal chefs in the Mughal court. Rampuri fish, kebabs, the most famous Rampuri korma and Adrak ka halwa are some of the delicacies of Rampuri cuisine. These foods are simple in preparation, but rich in taste. The evolving Rampuri cuisine is a natural outcome of invading new cultures, bringing their own culinary tradition into Rampur.

In the way of describing the Rampuri tradition, not to leave the brave breed of dogs, native to Rampur, and are also called as Rampuri Hound. These dogs were favoured by the Nawabs for hunting animals like tigers, lions and panthers and also to control jackals. It was built to cover a long distance in high speed and considered courageous for it capability and great endurance.

An historical and popular place to explore, the library holds a rare and precious compilation of 17,000 manuscripts, 3000 specimens of Islamic calligraphy, several astronomical instruments and 5000 miniature paintings. The paintings portray a variety of magical or hypnotic practise and super natural object with also beautiful flora, fauna and human life. It is one of the important places to visit in Rampur. 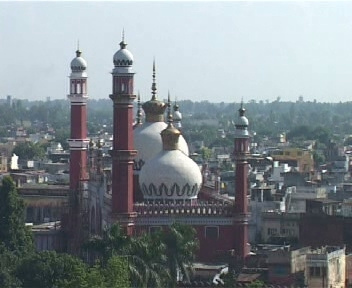 Jama Masjid is of great architectural importance and has become a major centre of tourism and business attraction, surrounded by big markets and shopping centres. The mosque was built under a large area in the cost of 300,000 and resembles the Jama Masjid of Delhi. The interior of the building features beautiful and intricate patterns and designs. Nearby cities like Haldwani, kanatal and Kedarnath are of great tourist importance.

Spread over an area of 84 km2 in the vast district of Rampur which is 2,367 km2, Rampur is located between longitude 79o05' E and latitude 28o48' N, is situated in the Rampur district along with the cities like Bilaspur, Suar, Milak, Shahbad and Tanda in Moradabad division of Uttar Pradesh, India.
According to the census of India 2011, Rampur has a population of 325,248 in which male constituted 52.2% and females 47.8%. The literacy rate constituted about 53.7% in this city.

Click Here to Read More about Geography of Rampur

How to Reach Rampur 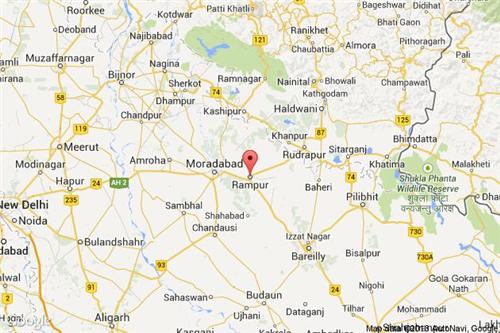 Pantnagar Airport is the nearest airport to Rampur and it is connected to all major cities and towns. The distance between these two cities is 56km and one can reach Rampur from Pantnagar airport through taxi cabs that are available outside the airport.

Rampur is well connected to all major cities by roadways. There is vast number of public transports available between Rampur to Delhi, Lucknow and Meerut, which are few hundred kilometers away from this city.

Rampur lies between Lucknow and Moradabad rail line. Some of the trains include Kashi Vishwanath Express, Avadh Assam Express Ganga Sutlej Express and Howrah-Amritsar Express. It is also connected by various express trains from Delhi, Lucknow and Amritsar.